The art of listening

All our childhood and adulthood, the whole agenda around listening was to give the ‘correct’ answer…to get ahead of the race and prove our point right. The point is, we never learned to just listen. We never really learned the whole idea of listening is not just to give the correct answer but to understand a point.

This reflects in every conversation we have today. We have no patience to listen to anyone…not even our heart. Imagine a situation when one of you friend calls you and venting out about his/her work environment. And before even that poor thing is done venting out, you have already started with all the gyaan you have. What we don’t understand is that person might not have called you for your unsolicited gyaan but he/she just might need a friend who could just listen. So why can’t we just god-damn listen?

So the next time, someone call you or text you….maybe just listen to them?

Modern Relationship- of Love and Infidelity

The other day, sitting with friends, we started discussing about relationships and infidelity. The question came up from one of the episodes of Modern love where the female protagonist, being in a relationship, slept with her ex. She came back and confessed it to her boyfriend saying it didn’t mean anything to her. The male protagonist walked out of the relationship right then, only to realise it years later that his one true love was that girl only.

Now, the question is, was it worth it? Spending all those years away from the one he really loved because for him, physical infidelity meant more than emotional one.

One of the friends said that if his wife sleeps with someone else and it doesn’t mean anything to her emotionally, he will talk it out. He’ll be angry, sure, but he will not give up years of building and nurturing that relationship. However, if she is not emotionally attached to the relationship or gets involve with someone emotionally, that’s the end of it.

For some people, I believe, emotional infidelity breaks the core of relationship. There is no coming back from it. And I think, it’s right as well. If a person is not emotionally attached to you anymore, which happens sometimes, there is no point holding on to that relationship. That person has nothing more to give to you and has given up on the very idea of companionship. You could come back from the physical infidelity..because deep down you know your partner still feel for you only…the love is not lost. But once love is lost..what’s the point dragging it when you know ultimately it’s all going to be end soon.

In today’s world, the world of millennials as we would like to call, it has become easier to look out for options outside marriage. Though there is no excuse for it, but I think people already have it pretty difficult in the work life and personal life, they just think that if just talking to someone makes their heart feel a little at ease, what’s the harm? Only to realise it later, that every person comes with a baggage and sometimes the lines get blurred. This is where the problem starts from.

There is no definition of right and wrong. It’s just life and things happen. The only question is, what you are ready to forgive and what is the end of it all for you!

Posted by Aashayein at 8:44 PM No comments:

If I could get a chance
to have my heart broken by you yet again
I would do it, all over again
Just so I could hear your voice
and run my fingers through your hair
feel the warmth of your words
yes, that's how toxic you are....darling
Posted by Aashayein at 7:16 AM 1 comment: 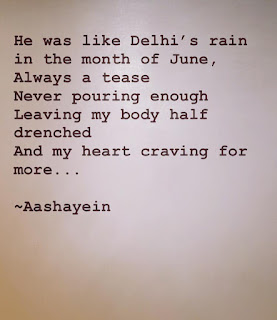 Follow my blog with Bloglovin
Posted by Aashayein at 10:28 AM No comments:

It was like October Morning
Neither too warm nor too cold
Just felt perfect, felt just right
The mild fragrance that makes your soul smile
And covering your body like a morning dew
Just like how October morning feels,
On your skin, on your heart and on your soul
Neither too warm, nor too cold

Posted by Aashayein at 8:40 AM No comments:

She told me stories about all the man she dated before she met her husband. One night when we were drunk and sharing secrets, she shared a story of one such man. A man who was ruthless, cold, selfish but enigmatic. Man, with beautiful words but a heartbreaker. She told me how this man would write poems for her and sweep her off her feet with his sensuous sense of humour. How he would make her heart beat faster and make her feel things that are too sinful to even talk about. She was crazy about him. Not in love though. But obsessed and crazy. He’ll make her dream and tell her how she is the centre of his world. He’d tell her his darkest dreams and secrets he claimed he never shared with anyone else. She longed for him. Day and Night. But he was like a rainbow to her, as she told me. She could adore him, dream about him even fantasize about him but never able touch him. But this man had a fragile ego and toxic arrogance. So, one day, he left her. Sulking, broken and appalled. It took her months to accept that he was really gone. And so, she started getting back to her normal life. Except one day, when he came back, only to destroy her more. I wondered, what made her accept him again after what he had done to her. But she smiled and said, it was the comfort and the familiarity. But I knew…it was his words. And since then, he kept leaving and coming back until one day when he told her he loved her. But as fragile as his ego was and as ruthless a person he was, he left again. This time, she couldn’t sleep for days….couldn’t stop her tears. This time she hated him but longed for him even more. This time her heart ached like never before and her mind couldn’t stop thinking about his voice, his words. This time, she was lost and hoped that he comes back. But deep inside her heart, she knew, this was the last time. He is never coming back again.

When I think about it, about all those poems and those words he wrote for her, were they actually for her? How many women is his life must be smiling with the thought that those words are meant for only them? How many hearts he must have broken? How void that person would be to have left so many times without even saying goodbye? And how cold his heart must have been to break one heart so many times?

The Leaving and Coming back

It was the familiarity, I believe, that dragged her back to that vicious circle every time. How do you explain going back to the place that has hurt you so much each time? And yet, there was this force, the comfort, the words that draws her back to it.

He always said that whenever they talk, it’s like talking to a mirror. She was his mirror. Though, she never believed him. He was a flirt. Has always been a flirt. In all these years, nothing has really changed. Yet, in between the thousands of lines he said, somewhere he made her believe that. Made her believe that she has a different place in his life. That she is not like the other girls he flirts with and later tell her about them. She knew better but still believed him. Not for long though. Maybe for few minutes…for couple of nights.

The ‘leaving’ and ‘coming back’ has been a part of their weird relationship. Or whatever you call it. They talk, they leave, and they come back. She’ll ask hundreds of questions. He, very cleverly, answers the one he wants to and deviate the other he doesn’t want to talk about. She always knew. But he always said that she is his mirror.